Water Technologies of the future

Water technologies of the future?

To talk about the technologies of the future concerning water, we must first refer to the first technology that changed the way people live. This is none other than the well! The well was a revolutionary invention at the time and its importance is often overlooked. It was invented in the Neolithic era (10,000 – 7,000 BC) and obviously the first wells were created by hand. This source of drinking water has allowed mankind to move into further distances from natural sources and, more importantly, to cultivate larger areas of land. The first technological innovation from a large list that followed and continues to grow even today. Today, specialized and complex networks bring to our home the “elixir of life” while at the same time new technologies absorb the fog from thin air to provide water even in the most inaccessible parts of the planet.

So, what are the technologies that serve us today and what has humanity thought about the future?

According to the WHO (World Health Organization) more than 1.6 million people die each year from diseases linked to the lack of clean drinking water. It is well known that there is a lot of pressure as natural resources are limited and humanity is completely dependent on conserving these resources. For this reason, day by day we see new technologies that either aim at the “production” of drinking water or the purification of existing water sources and produce innovative software systems for the control of complex drinking water supply networks.

As it is impossible to eliminate sewage and microorganisms, the attention and the investments have turned to technologies that allow us to ‘filter’ water by various methods.

Researchers in India have found a solution to this perennial problem with a water treatment system using nanotechnology.

The technology removes germs, bacteria and other substances from the water using composite nanoparticles, which emit silver ions that destroy infectious organisms. “Our work can start saving lives,” says Thalappil Pradeep, a professor at the Madras Institute of Technology in India. “At just $ 2.50 a year, anyone can provide microbial safe water for a family.”

It’s a sign that low-cost water treatment can finally be around the corner – and be commercially scalable.

Membranes are not something new in the industry, but they remain an object around which there is constant research and development. There are different types of membranes (ceramic, chemical, high and low pressure, etc.). Their use is as simple as one imagines and they act as a filter while the water passes through.

It may sound dangerous but ultraviolet (UV) technology is mainly used in the water and wastewater treatment industry as a disinfection process that utilizes the germicidal effect of ultraviolet light in the range of 250 to 270 nm. The process is usually designed so that water flows in a narrow area around a series of UV lamps. Microorganisms in water are inactivated through exposure to ultraviolet light.

Not all people who do not have clean water live in drought-stricken areas. Often, there is “water, water everywhere, but not a drop for consumption” due to pollution from all kinds of waste or other environmental issues. Water purification systems are often expensive and time consuming, but researchers at Stanford University and the SLAC National Accelerator Laboratory recently developed a UV water purifier housed in a tiny black rectangle that reduces the long process from 48 hours to about 20 minutes. Although the device is far from mass-produced, laboratory tests on the prototype suggest that it could be the first step towards a new generation of water purification methods that aid in drinking dirty water.

Purifying technologies may be very important in areas where people have access to drinking water, but they certainly do not seem as impressive as the following inventions which provide water to parts of the globe where no one would have imagined it would be possible. 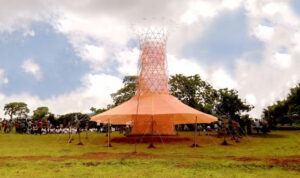 It took several years to make the design of the Warka Water Tower a reality, but its first pilot project in a rural village in Ethiopia was finally built and started collecting clean water from the air! The award-winning design is based on fog collection concepts and takes the form of a huge cylinder made of bamboo and wrapped in recycled mesh. The tower is surrounded by a canopy that provides shade to the locals to rest while channeling condensed water from the base of the tower. The makers of the Tower planned to put it into mass production by 2019, something that will eventually take a few more years. 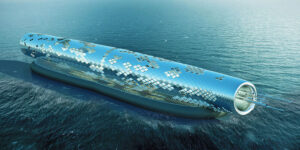 Perhaps the most futuristic project, a new desalination project designed for California called The Pipe, made a splash this summer with creators promising to provide 1.5 billion gallons of clean drinking water for the dry state. The solar plant relies on electromagnetic desalination methods to convert seawater into clean water, then filter the saline by-product through thermal baths and finally rinse it in the Pacific Ocean. The Tube also attracts curiosity, as it was designed to look like more like a sculpture rather than an industrial factory.

The world’s largest fog collector uses giant fences / nets to trap dense fog in the Moroccan desert and turn it into clean, drinking water. With an area of 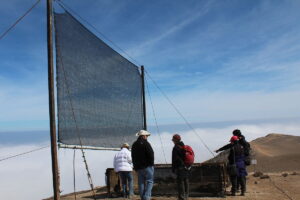 ​​over 600 square meters, the construction takes advantage of the fog that covers the drought-affected area of ​​Aït Baâmrane for six months each year. It reportedly produces up to 17 gallons of clean, safe drinking water per square foot of the fence. Solar pumps, along with a piping system, provide clean water to 400 locals, who typically struggle to access safe water in these dry areas.

We are forced to embrace technologies that improve the quality of drinking water we consume daily as well as those that give areas of intense drought the choice of life.

It is very gratifying that WHO has made it a priority to ensure clean drinking water around the world. This becomes apparent by guidelines such as the Water Safety Plan, which suggests that water utilities around the world must implement Incident Prevention and Response Plans that may affect the integrity of drinking water flowing through their network as well as the citizens.

I think it is time to make these technologies part of the present and not the future!